The Celts arrived in Ireland over the course of several centuries from around 500bc; it was a gradual assimilation rather than an actual invasion. They brought with them the Gaelic language, fine artistry, and a social order based on warrior values. They also brought the iron plough, making it possible for the first time to cultivate rich valley and lowland soils and to form settled communities. By 250ad Celtic culture was in place across the entire island of Ireland.

Celtic society was made up of extended families that were grouped together to form territorially based tribes. These were hierarchical and class-based ruled by a king or a queen, then a warrior aristocracy and grades of nobles. Druids, bards, judges, and artisans were the professional classes. They enjoyed special privileges having undergone years of intensive and difficult training. Then the farmers who paid rent to the nobles. Indeed, the whole Celtic economy was based on agriculture and livestock played an essential role serving as an equivalent to money. A Celt’s position in the social hierarchy was determined by the number of cattle he/she owned.

Iron Age Celts were highly skilled artists, metal-smiths, miners, road-builders, and farmers. They had strong trading links with Roman Britain and also traded for amber and precious metals as far as the Baltic coast and Mediterranean. Crafts such as cloth-weaving, basket-making, pottery, and leather-working were mainly undertaken by women.

Celts relied on the spoken word. Writing did not become highly developed until the arrival of Christianity, so their history, laws, and culture were maintained orally by bards and druids and passed down the generations by word of mouth.

Celtic spirituality was rooted in a reverence for the natural world, populated with many gods and goddesses and steeped in ritual. They had strict ideas about honour and responsibility. Celts took tremendous pride in their appearance and they were famous for their high spirits, love of liberty and courage in battle. 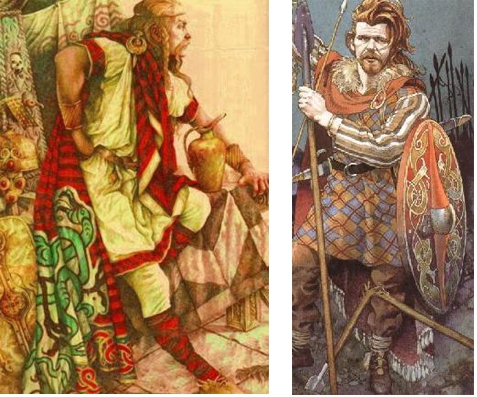 Ancient Irish myths describe a society dominated by the warrior hero. Single combat was one of the most effective ways for a warrior to gain status and prestige. Warriors would charge into battle fully naked, dyed blue, and with great leaps and screaming cries, thoroughly unnerving the enemy. For a time they were more advanced militarily than their Roman counterparts, with superior chariots, shields, and spears. They invented chain mail and iron helmets. They served as elite troops in many foreign armies including those of Hannibal and the Egyptian pharaohs such as Cleopatra who kept a band of 300 Celtic warriors as her personal bodyguards.

Despite their tremendous bravery in battle, they were no match for the war machine that was Rome – far superior in organization, authority, and discipline. The Celts thought and acted as individuals rendering their armies fragmented and unstable. Celtic Europe inevitably succumbed to the expanding Roman Empire. It was Ireland’s good fortune that Rome decided not to invade and Celtic Ireland continued to flourish.