Brendan Behan was born February 9, 1923, in Dublin, Ireland, the first child of Stephen and Kathleen (Kearney) Behan, though his mother had two sons by a previous marriage. Born into a family with radical political leanings, Behan was reared on a double dose of IRA propaganda and Catholicism. The radical Left was part of his genetic makeup. His grandmother and a grandfather were jailed for their roles in the revolution, the former for illegal possession of explosives when she was seventy years old and the latter for his part in the murder of Lord Cavendish. Both of Behan’s parents fought in the Irish Revolution and in the Troubles. Ultimately jailed for his participation in the violence, Behan’s father saw his son for the first time through prison bars.

Behan was a precocious child whose reverence for writers was spawned by his father’s readings of Samuel Pepys, Charles Dickens, Émile Zola, George Bernard Shaw, and various polemical treatises to his children. By Behan’s own account, his home was filled with reading, song, and revolution. Juxtaposed to this violent heritage was Behan’s conservative religious training. He attended schools run by the Sisters of Charity of St. Vincent de Paul, where he was a favorite, and another operated by the Irish Christian Brothers, where he found himself in constant disfavor.

His militant disposition surfaced early, when at the age of nine he joined the Fianna Éireann, the junior wing of the IRA. Most of his early adult years were spent in prison. Arrested in Liverpool at the age of sixteen for participating in IRA bombings in England, Behan spent three years in the Borstal, the English correctional institution for juvenile delinquents. Released in 1941 and deported to Ireland, Behan was again incarcerated the following year for shooting at a police officer. He had served four years of a fourteen-year sentence when he was released in 1946. Additional stays in jail followed throughout his life.

The worldview projected in Behan’s works recalls the environment in which he matured, one dominated by a radical family and by his prison experience. Cradled in the romance of revolution, Behan was cultured in a more traditional sense. Kathleen and Stephen Behan reared their children with a love for music and literature. Nurtured with a reverential attitude toward Kathleen’s brother Peadar Kearney, a noted composer who wrote the Irish national anthem, the Behan children learned his marches and ballads in a home continuously filled with music. According to Colbert Kearney, Behan’s precociousness as a child was largely attributable to the education he received at home. His father instilled in him a deep-seated respect for Irish writers and rhetoricians. He learned to read at an early age and was fond of memorizing speeches by Irish patriots such as Robert Emmet. Not as readily discernible in Behan’s work is the influence of his strict upbringing in Catholicism. Behan had a love-hate relationship with the Church, and often his works condemn religion. Yet one of his most bitter disappointments came when he was excommunicated while serving time in prison. Some critics believe that this was a crisis in Behan’s life from which he never recovered.

Behan began writing while in prison, and his first story, “I Become a Borstal Boy,” was published in The Bell in 1942. The plays, poems, and short stories written during his prison terms are all autobiographical. The years from 1946 to 1956 were the most ambitious of his career.

“I respect kindness in human beings first of all, and kindness to animals. I don’t respect the law; I have a total irreverence for anything connected with society except that which makes the roads safer, the beer stronger, the food cheaper and the old men and old women warmer in the winter and happier in the summer.”

For a time he lived in Paris, but he was eventually drawn back to Ireland, where he worked as a housepainter and freelance journalist. During this hiatus from serious encounters with the law, he married Beatrice Salkeld, daughter of the noted Irish artist Cecil Salkeld. Behan’s major break came when Alan Simpson agreed to produce The Quare Fellow at the Pike Theatre in Dublin in 1954. The play met with critical acclaim, but, to Behan’s disappointment, the more prestigious Irish theaters such as the Abbey refused to stage it. This rejection spurred in Behan an overwhelming desire to be accepted as an artist in his own country. The Quare Fellow was noticed by Joan Littlewood, whose 1956 London production made Behan an international sensation. He followed this success with another play, An Giall, which he wrote in Gaelic and later translated as The Hostage. Littlewood’s subsequent production of The Hostage proved an even greater success than The Quare Fellow. 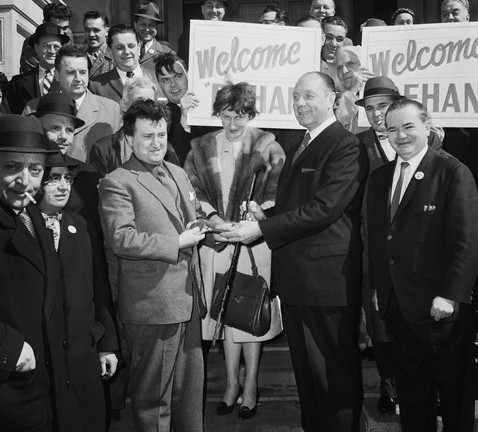 “There is no such thing as bad publicity except your own obituary.”

Critics proclaimed Behan a literary genius, but he was destroyed by his success. His notorious interruptions of his plays with drunken speeches shouted from his seat in the audience and his intoxication during interviews for the British Broadcasting Corporation enhanced the “bad boy” image he so carefully cultivated, but ultimately it killed him. The most tragic repercussion of his alcoholism proved to be his inability to sit and write for an extended period of time. The Hostage was Behan’s last good work. When his writing sojourns to Ibiza, his favorite retreat, and the United States and Canada produced little, he resorted to taping sessions to meet his publication contracts.

By 1960, after two major breakdowns as well as intermittent stays in hospitals to dry out, Behan was a shell of his former robust personality. Riding on his reputation of acknowledged artistry, he found himself incapable of writing, which led him to drink even more. Behan died March 20, 1964, at the age of forty-one. Several of his edited works published after his death created a brief, cultish interest in the man and his writing, but this adulation soon passed. What remains is the recognition that Behan was one of the finest twentieth century Irish writers. His talent will be recognized long after his colorful reputation has faded.