Oscar Fingal O’Flahertie Wills Wilde was born in Dublin on October 16, 1854. His mother, Lady Jane Francesca Wilde, was the poet ‘Speranza’, and a journalist active in the women’s rights movement. His father, Sir William Wilde, also a gifted writer, was an eminent specialist in diseases of the eye and ear and founded a hospital in Dublin.

“I sometimes think that God in creating man somewhat overestimated His ability.”

Wilde was educated at Portora Royal School in Enniskillen, Co. Fermanagh (1864-71). He went on to study Classics at Trinity College, Dublin (1871-74) and won a scholarship to Magdalen College, Oxford (1874-78). His wit, style and eccentric dress made him the ideal spokesman for Aestheticism, the late 19th century movement in England that advocated ‘art for art’s sake’ and the higher ideals of pleasure and beauty – he wore his hair long and decorated his rooms with peacock feathers, lilies, sunflowers and objets d’art once remarking to friends: “I find it harder and harder every day to live up to my blue china.”

“If I am occasionally a little over-dressed, I make up for it by being immensely over-educated.”

Before his great success as a writer, Wilde settled in London where he worked as an art reviewer. In 1882 he embarked on a lecture tour of Canada and the United States, advising the customs officer on his arrival that he had nothing to declare but his genius. In 1883 he visited Paris where among others he met de Goncourt, Daudet, and Hugo. His play ‘Vera’ was produced in New York that same year. In 1884 Wilde married Constance Lloyd, daughter of a wealthy Dublin barrister with whom he had two sons, Cyril and Vyvyan. He became a regular contributor to the Pall Mall Gazette and Dramatic View and from 1887-89 he edited The Woman’s World magazine. 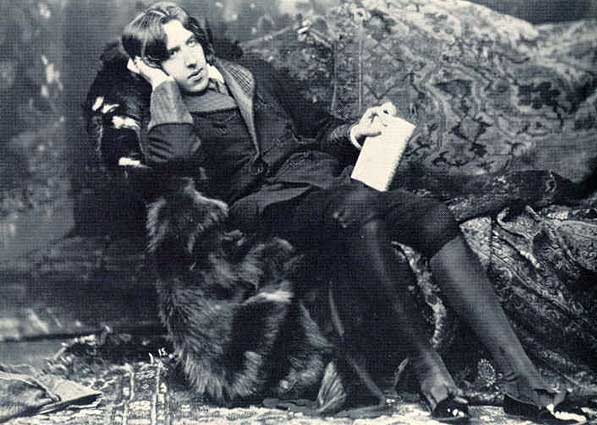 The Happy Prince and Other Tales, a book of fairy-tales written for his two sons, was published in 1888. The Picture of Dorian Gray followed in 1890. Dorian, a Victorian gentleman, sells his soul to keep his youth and beauty while his portrait ages and catalogues his every evil deed. Wilde also produced several essays: The Decay of Lying (1889) and The Critic as Artist (1890). In The Soul of a Man Under Socialism (1891), Wilde rejects the ideal of self-sacrifice in favour of joy:

“The only way to get rid of a temptation is to yield to it.”

Wilde made his reputation in the theatre with a series of highly popular plays: Lady Windermere’s Fan (1892), A Woman of No Importance (1893), An Ideal Husband (1895) and The Importance of Being Earnest (1895). Audiences were delighted by their cleverness, ingenuity and wit. Wilde was now at the height of his fame and earning up to £100 a week from his plays.

“We are all in the gutter, but some of us are looking at the stars.”

In 1891 Wilde was introduced to an Oxford undergraduate, Lord Alfred Douglas, known as ‘Bosie’ to his friends. An intimate friendship developed and by 1893 Wilde was infatuated with Douglas. When Douglas’s father, the Marquis of Queensberry, accused Wilde of sodomy, Wilde, encouraged by Douglas and against the advice of his friends, sued him for libel. Wilde lost the case incurring considerable legal expenses which left him bankrupt. 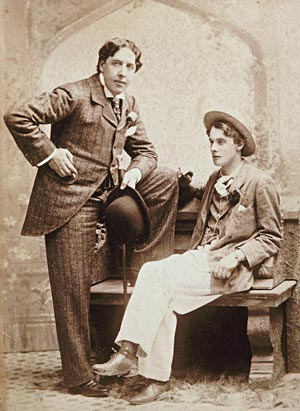 After the trial, a warrant was issued for Wilde’s arrest. He was convicted on charges of sodomy and gross indecency and sentenced to two years’ hard labour. Victorian England denounced Wilde and performances of his plays were cancelled. During his imprisonment Wilde collapsed bursting his right ear drum, an injury which would later contribute to his early death. He was released from Reading Gaol in May 1897 and in the same year wrote The Ballad of Reading Gaol, a long poem commemorating the harsh rhythms of prison life.

“The truth is rarely pure and never simple.”

Wilde lived in Paris until his death from cerebral meningitis on November 30, 1900. His friends, Robert Ross and Reginald Turner, remained loyal to Wilde providing him financial and emotional support – they were at his bedside when he died. Oscar Wilde is buried in Père Lachaise Cemetery in Paris.