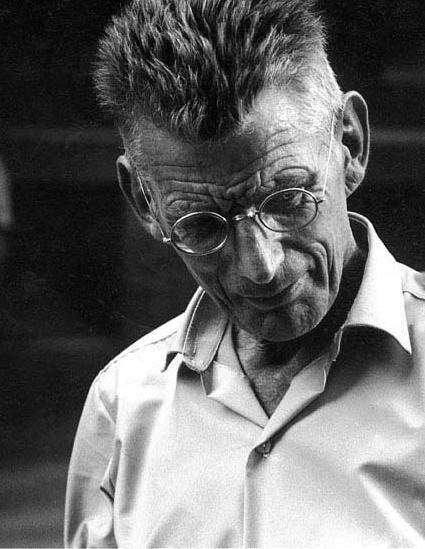 Samuel Beckett was born in Dublin on April 13, 1906, into a middle class Protestant family. He was educated at the Portora Royal School in County Fermanagh as Oscar Wilde had been before him. A natural athlete, he excelled at sport especially cricket. From 1923 to 1927 he studied French, Italian and English at Trinity College, Dublin. With his natural academic abilities he seemed destined for an academic career.

After university, Beckett taught briefly at Campbell College in Belfast before taking up a post in 1928 as lecteur d’anglais in the École Normale Supérieure in Paris. While in Paris, he met the renowned Irish author James Joyce. Their acquaintance grew into a friendship based on mutual admiration and respect. Beckett was particularly impressed and influenced by Joyce’s dedication to his art and he came to share it. His first published work in 1929 was a critical essay defending Joyce’s writings and method. Their friendship cooled after Beckett rejected advances from Joyce’s daughter Lucia who suffered from schizophrenia.

In 1930, Beckett returned to Trinity College to work as a French lecturer. He received his MA in 1931. He soon found that he had no vocation for university teaching and resigned from Trinity at the end of 1931 to devote his time entirely to writing. That same year he won a small literary prize with his hastily composed poem Whoroscope, in which René Descartes meditates on the subject of time and the transiency of life. This was followed with a collection of essays, Proust (1931) and a short story collection More Pricks Than Kicks (1934).  His comic novel Murphy was published in 1938.

The years that followed his departure from Ireland were not happy ones but they were not wasted. Beckett travelled widely in Europe learning about visual arts and studying European languages and literature. He made his living doing literary translations. After his father died he received an annuity that enabled him to live in London where he underwent psychoanalysis for 2 years – aspects of which became evident in his later works. 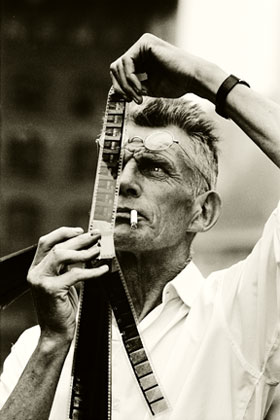 He eventually settled in Montparnasse, Paris, in 1937 and became a regular visitor to the cafés of the Left Bank where he befriended artists Alberto Giacometti and Marcel Duchamp, with whom he regularly played chess. Sometime around December 1937, Beckett had a brief affair with the art collector, Peggy Guggenheim. In January 1938, he was stabbed and nearly died while refusing the solicitations of a notorious pimp to whom he had refused to give money. The publicity of the attack attracted the attention of a young piano student, Suzanne Deschevaux-Dumesnil and the two began a lifelong companionship.

“The sun shone, having no alternative, on the nothing new.”

Beckett was on holiday in Dublin at the outbreak of the war but returned to France where he joined the French Resistance, working as a courier; on several occasions he narrowly missed being caught by the Gestapo.  In August 1942, his unit was betrayed and he and Suzanne fled south on foot to the safety of unoccupied Roussillon in the Provence-Alpes Côte d’Azur region. There, he worked as a labourer and wrote his last novel in English, Watt. He continued to assist the Resistance as agent de liaison, translating information about German troop movements into English for transmission across the Channel.

After the war, Beckett was awarded the Croix de Guerre and the Médaille de la Résistance by the French Government but he rarely spoke about his wartime efforts and would refer to his work with the Resistance as “boy scout stuff”. For Beckett, the greater drama of his life was in the struggle with his inner demons. Depressive and uncomfortable in his skin he was haunted by a feeling of absence and of being an outsider in his own life. Yet he could make light of his own dark disposition too: when someone at a cricket match remarked that it was “the sort of day that makes one glad to be alive,” he replied: “Oh I don’t think I would go quite so far as to say that.” 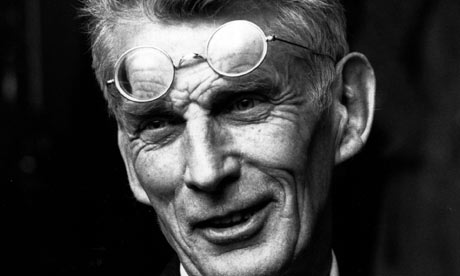 The end of the war enabled Beckett to continue his annual summer visits to his family in Dublin. It was while visiting his mother that he made a profound discovery: “I realized that Joyce had gone as far as one could in the direction of knowing more, [being] in control of one’s material. He was always adding to it; you only have to look at his proofs to see that. I realized that my own way was in impoverishment, in lack of knowledge and in taking away, in subtracting rather than in adding.” Beckett became obsessed by a desire to create what he called “a literature of the unword”. He dispensed with elegance. His prose became increasingly bare and stripped down. He wrote in French because he said it was easier to distance himself from his own rich linguistic grounding in English: “You couldn’t help writing poetry in it,” he complained.

In 1947, Beckett returned to Paris, where within two years he wrote his trilogy of novels: Molloy, Malone Dies and The Unnameable. Throughout these three works we witness the progression of Beckett’s increasing tendency towards compactness and a fiction that dispenses with convention in order to focus on essential components of the human condition. Molloy still retains many of the characteristics of a conventional novel in structure, plot, time, place, and movement.  In Malone Dies, although there is still some indication of time and place, plot is largely dispensed with and the action of the book takes the form of an interior monologue. In The Unnameable there is no plot and almost no sense of time and place; the essential theme seems to be the conflict between the narrator’s drive to continue speaking, and thus existing, and his almost equally strong urge towards silence and oblivion.

“Perhaps my best years are gone… But I wouldn’t want them back. Not with the fire in me now.”

Waiting for Godot (1949) is often referred to as “the play where nothing happens”. The theatre critic Kenneth Tynan remarked, “It has no plot, no climax, no denouement; no beginning, no middle and no end.” It is a tragi-comedy in which the characters of the play – two tramps, Vladimir and Estragon – bide their time awaiting the arrival of Godot, someone they have never met and who may not exist. The play seems to end in precisely the same condition it began, with no real change having occurred. At the time it sparked controversy: detractors denounced it as a prank disguised as a play while supporters saw it as a parable on the human condition and a fresh alternative to the dominant realist theatre. 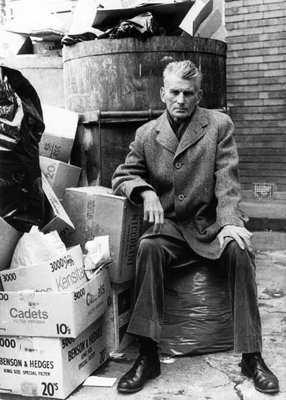 It opened in London in 1955 and enjoyed a run of 400 performances bringing the reclusive and unassuming author international fame. It established him as a radical innovator and one of the leading names of the Theatre of the Absurd. Beckett had evolved a style which successfully balanced comedy and tragedy, the grotesque and the sublime; his works probed the big questions of human existence: ‘who are we?’ and ‘why are we here?’. Although he went on to write a number of other remarkable plays nothing was quite equal to these earlier works in profundity, originality and imaginative power.

His later work grew ever more austere and minimal but retained its hypnotic power. “Nothing is funnier than unhappiness,” says Nell in Endgame (1957), speaking from a dustbin. In Happy Days (1961), the heroine is buried in sand and in Play (1963) the three characters are immersed up to their necks in funeral urns. Krapp’s Last Tape (1958) is considered to be his most autobiographical play and closest to his inner experience, especially in the feelings conveyed of regret, unresolved need, inexorable decline and forlorn hope. In Not I (1972), the speaker is simply a ‘Mouth’ pouring forth a torrent of jagged memories to a silent, helpless ‘Auditor’.

“The hallway of every man’s life is paced with pictures; pictures gay and pictures gloomy, all useful, for if we be wise, we can learn from them a richer and braver way to live.”

In 1956, the BBC commissioned Beckett to write a radio play, All That Fall; he went on to write several radio, film and television plays. He took an increasing interest in the direction of his own plays and was highly influential in the theatre. A modest and unassuming man, he was intransigent only about standards of production and translation of his writings. 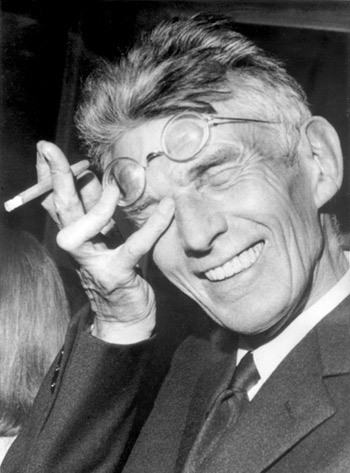 Beckett was awarded the Nobel Prize for Literature in 1969 but he did not attend the presentation ceremony and gave away the prize money to needy artists. He had no desire to receive personal attention for giving expression to what he called “the issueless predicament of existence”.

“I am still alive then. That may come in useful.”

He continued to live on the rue St. Jacques in Montparnasse. Although famously reclusive, he would meet his friends at the neighbourhood cafe, drink espresso, and smoke thin cigarettes. He was, by all accounts, the soul of kindness and generosity. At the age of seventy-six he said: “Even though everything seems inexpressible, there remains the need to express. A child needs to make a sand castle even though it makes no sense. In old age, with only a few grains of sand, one has the greatest possibility.”

His final days were spent in a nursing home. Although he continued to write until his death, he said that each word seemed “an unnecessary stain on silence and nothingness.”  Beckett’s writing took literature as close to silence as we can imagine. Few writers have achieved such purity of expression. Few writers have spoken so fully with so few words.