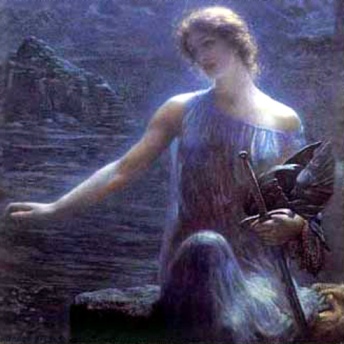 For the pagan Celts, the essence of the universe and all its creativity was female.
Danu – also known as Anu – was the earth goddess from whom all life emerged. She embodied the earth, rivers and sea. She offered fertility, abundance, regeneration and nurturing. She is considered the mother goddess of all Celtic gods and mother of Ireland’s original mythical inhabitants – the Túatha Dé Danaan, or fairy-folk.

Long before the Roman Empire the Celtic people spread across huge areas of Europe. Danu’s name is remembered in placenames such as the river Danube. In Ireland, she is symbolised by two raised earthworks in the Kerry landscape which resemble breasts. These are known as ‘the Paps of Anu’. The Ancient Irish made sure that we couldn’t fail to notice Danu’s sensual beauty by erecting mounds of stones to represent her nipples.